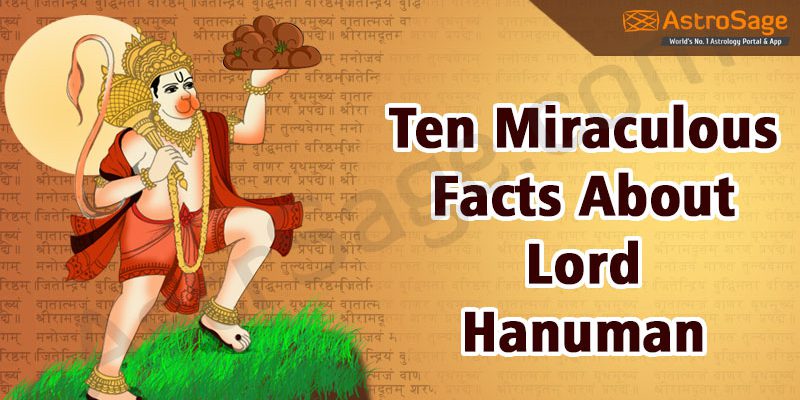 Our hearts get filled with devotion and reverence as soon as someone mentions Lord Rama’s ardent devotee Shri Hanuman. Widely known as Bajrangbali, he is an extremely powerful and miraculous deity, and immediately lends a helping hand as soon as he hears his devotee being in trouble. Since he eliminates all the troubles and obstacles, he is widely known as Sankat Mochan. Let’s know 10 phenomenal and amazing things related to Bajrangbali.

Bajrangbali is considered to be the eleventh Rudra avatar of Lord Shiva. This is why he is said to be the possessor of unlimited power. Lord Shiva incarnated as Lord Hanuman, his eleventh Rudra avatar, to spend time with Shri Rama, the human incarnation of Lord Vishnu. Hanuman ji is unlimitedly powerful and gets easily pleased with his devotees. Also, one who venerates Lord Ram gets the blessings of Lord Hanuman as well.

The one is as vigorous as the heart, as strong as the wind, who is Jitendriya and has sought immense control over his senses, who is intelligent, superior in knowledge and wisdom, who is the son of Lord Pawan and ranks high amongst the Vanars, I take refuge under the grace of Shri Ram’s messenger ( Bajrangbali Shri Hanuman).

Read the Chaupai of Hanuman Chalisa below: 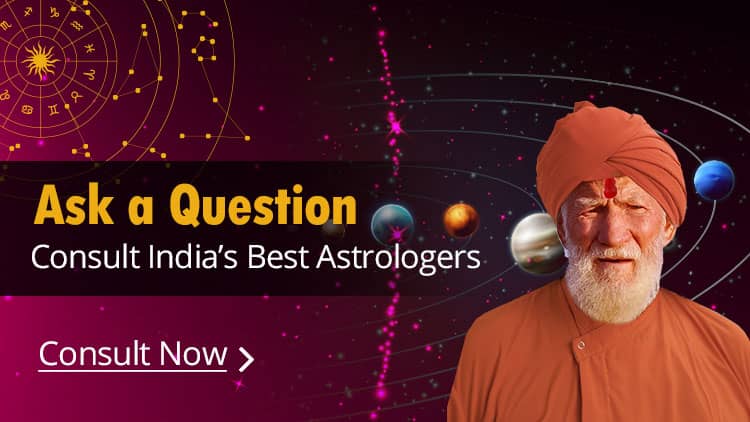 Bajrangbali, A Disciple of Lord Sun and Friend of Shani Dev

When Hanuman ji requested to Lord Surya in regards to academics and research, Lord Surya responded that since he constantly remains in motion, it will be difficult for Lord Hanuman to learn from him, which is when Hanuman ji said he too will remain at his side and in constant motion to attain the learnings. On this, Surya Dev accepted his request and undertook him as his disciple. In this way, Lord Sun became a guru to Bajrangbali and imparted many kinds of teachings.

The one who has an incredible force, who possesses a sharp body like a mountain of gold, one who destroys a monster like forest and is at the forefront of all the knowledgeable people. I bow in front of Shri Hanuman, the beloved devotee of Lord Raghunath ji and the son of Lord Pawan, who is the master of all the virtues and the master of Vanars.

Lord Shani is the son of Lord Sun, and therefore Hanuman ji is also friendly with his guru’s son Shani Dev. This is one of the reasons why Shanidev never harms Lord Hanuman’s devotees and Hanuman ji always protects his dear friend’s devotees as well. Where on the one hand Shani Dev teaches the lesson of Karma, Hanuman ji shows the path of devotion. It is said that once in a battle, Lord Shani got hurt and in order to save him, he applied mustard oil on him. Since then, Lord Shani considered Hanuman ji as his dear friend and promised not to harm his devotees.

Bajrangbali is also called Brahmachari because he practiced lifelong celibacy. But do you know that Lord Hanuman is married and has a wife. There is an interesting story in this context, according to which Lord Bajrangbali was taking his lessons from Lord Surya but some lessons could be learned only after getting married. Since it was a source of inconvenience for Lord Hanuman, his guru Surya Dev figured out a solution for this, and asked him to marry his bright daughter Suvarchala. At the behest of Lord Sun, Hanuman ji married his daughter only for the sole purpose of gaining education.

This marriage is also mentioned in Parasara Samhita, according to which Lord Surya imparted five out of nine teachings to Lord Hanuman, as one was required to be married for the other four. Suvarchala was ascetic in nature, and Lord Surya mentioned in front of Lord Hanuman that even after marriage will he remain a Bal Brahmachari forever since Suvarchala will remain absorbed in austerity. Even today in the Khammam district of Telangana state of India, the idol of Hanuman ji is placed with his wife Suvarchala, and visiting here brings happiness in marital life.

Hanuman ji, after attaining education, had become the lord of Ashta Siddhi and Nav Nidhi. Below are the name of those eighth accomplishments:

Invincible To Divyastra and Brahmastra

Lord Hanuman is so powerful that no weapon of any kind can harm him. Once during his childhood, he mistook the rising Sun to be a fruit and flew all the way just to consume it. Exact during that time, Rahu was coming near the Sun to create an eclipse, but due to the might of Lord Hanuman, he ran away and complained about Bajrangbali to Lord Indra. Hearing this, Lord Indra tried to stop Bal Hanuman, but since he was a mischievous child and didn’t listen, Indradev struck his Vajra on the chin, due to which he became unconscious and fell on the Earth.

Since he was the son of Lord Vayu, Pavan Dev stopped the airflow of the world, leading to everyone visiting Lord Brahma for a solution. Hearing their plight, he revived Lord Hanuman and gave all the divine weapons to the Gods and Goddesses. He also highlighted the fact that from now on, no Brahmastra will ever harm Hanuman.

When Hanuman ji reached Lanka, Meghnad used the Brahmastra to which Lord Hanuman complied even though he could have easily avoided it. Below Chaupai from Sunderkand reveals information about it:

When Meghnad used Brahmastra to tie Lord Hanuman, he thought that not accepting this Brahmastra will diminish all its glory, and since he thought of visiting Ravana’s assembly, he accepted the Brahmastra on himself.

Bajrangbali, who is said to be the most beloved devotee of Lord Rama, also fought with Shri Ram himself. There is a story behind it, according to which King Yayati insulted the Guru of Lord Rama, Maharishi Vishwamitra. As a result, Lord Vishwamitra ordered Lord Shri Ram to give death penalty to King Yayati, who fearing Lord Rama, ran away and sought shelter from Lord Hanuman. He requested for his life from his mother Anjana, which is why she promised King Yayati the divine protection by Lord Hanuman.

When Hanuman ji came to know that he had to fight with Shri Ram, he found himself in utter dilemma but searched for a solution with his intelligence and wisdom. In such a situation, Lord Hanuman kept chanting”Jai Shri Ram” by not retaliating even though Lord Rama used numerous weapons under the compulsion. Since there wasn’t any effect on Lord Hanuman, Maharishi Vishwamitra, on seeing this, asked Ram to stop and freed him of any compulsion. In this way, King Yayati was saved and Hanuman ji also fulfilled his promise. Hence, it is believed from that day onwards that the significance of the name of Lord Rama is bigger than that of himself. This is why no weapon can kill anyone who chants the name of Lord Rama.

How 2020 Treats You? Personalised Horoscope 2020 Reveals It All!

One of the Chiranjeevis

Even today, such superhuman beings, either due to their words, activities or curses, are still alive on this Earth, and it is believed that they will live till the end of Vartaman Kalyug. Such people are called as Chiranjeevi and Bajrangbali is also one of these:

Whoever chants the above mantra and remembers these Chiranjeevis attains longevity and solution to all the life problems. Even in the Dwapar Yug, he was present on the flag of Arjuna’s chariot with Shri Krishna.

Hanuman As A Father

We all know that Hanuman ji is highly ascetic in nature. But, however powerful or celibate he is, he is also a father to a son. A story is connected in this context, according to which when Hanuman ji’s tail was set on fire by the command of Ravana, he burned the entire Lanka and jumped into the sea to extinguish the fire. Since he was sweating due to heat, a few drops of his sweat fell into the sea and was swallowed by a fish thinking of it as food. After sometime, the servants of Ahiravan, the king of the Underworld, caught the fish and while they were ripping its belly, a creature emerged out of it, which was taken to Ahiravan.

Ahiravan appointed him the keeper of Patalpuri. This creature was known as Lord Hanuman’s son Makardhwaj. When Ahiravan kidnapped Shri Rama and Lord Lakshman and brought them to Patal Puri during the Ram-Ravan war, Hanuman ji reached Patal city to protect them. Upon reaching, he witnessed a Vanar protecting the gates of Patal Puri and upon asking, he announced himself as the son of Lord Hanuman. This angered Lord Hanuman who shockingly said that since I am a Brahmachari, how can I be your father!

When Rama Ravana defeated Ahiravana Shri Rama and Lakshman ji and took them to Patal Puri, Hanuman ji also reached Patal city to protect them. Seeing a monkey there, he was surprised and asked Makardhwaja to introduce him and Makardhwaja said that I am Makardhwaja, son of Hanuman and protector of Patalpuri. Then Hanumanji became angry and said what are you saying? I am a child celibate! How can you be my son?

After knowing that he himself is his father, the great Lord Hanuman, Makardhwaj fell at his feet and told him the whole story. Hearing this, Lord Hanuman accepted him as his son, but since he was there to protect Lord Rama and Lakshman, he expected Makardhwaja to leave his way. However, Makardhwaj couldn’t bulge from his duties, and initiated a fight with him. When Lord Hanuman failed to persuade him, he captured Makardhwaj in his tail and entered the palace. After killing Ahiravana and saving Lord Rama and Lakshman, he freed Makardhwaja at the behest of Rama and crowned him as the King of the Underworld.

Sunderkand is most loved by Hanuman ji since it introduces him to his lost power. This scripture sheds light on how Lord Hanuman worked towards uniting his Lord Rama and Mother Sita. Hearing its description makes the Lord happy, which is why Sunderkand is considered very powerful and impactful. Hence, if you ever fall into a deep pit or face difficult situations in life, reciting Sunderkand in front of the picture or idol of Lord Hanuman helps to attain his grace, blessings and protection.

A Deity To Appease In Kalyug: Lord Hanuman

Hanuman ji is regarded as the awakening deity of the Kaliyug and can be appeased immediately. It is believed that Lord Hanuman always protects the one who chants the name of Shri Ram and offers fruits within no time. He should be worshiped with devotion, purity and reverence since profanity can reignite his anger.