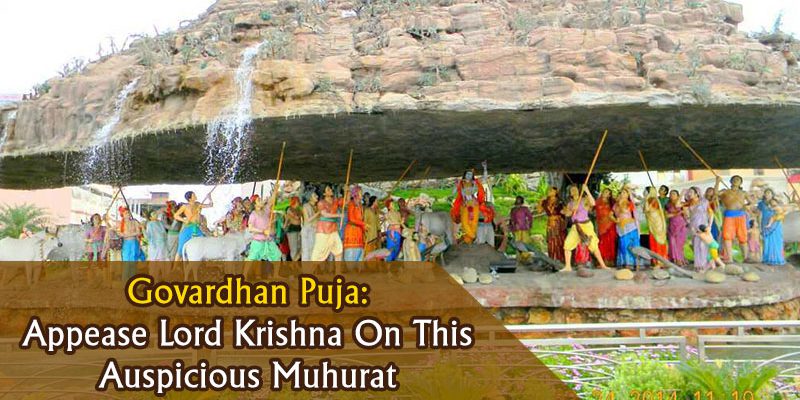 Govardhan Puja after Diwali WIll Bring Luck & Prosperity! Read the mythological legend behind celebrating this festival and know the puja muhurat for worshipping the Govardhan Parvat.

According to Indian scriptures, worshiping Lord Indra, Lord Agni and Lord Varuna on this day is auspicious. Cow & Bull are also worshiped on the day of Govardhan Puja. Lord Krishna is venerated with full devotion on this auspicious day, which is why, flock of devotees can be seen at the Krishna temples and Bhandaras are conducted.

Note: This muhurat is for New Delhi, India. Learn the Govardhan Puja Muhurat for your city.

According to the Hindu Panchang or Calendar, the festival of Govardhan Puja is celebrated on the Pratipada tithi of the Shukla Paksha in the month of Kartik. However, if the Moon becomes visible at the evening of Pratipada of Shukla Paksha, then Govardhan Puja should be conducted a day prior.

It is believed that when Lord Indra became blindly proud of his powers, Lord Krishna planned to teach him a lesson. According to Vishnu Purana, once, the residents of Gokul were preparing different types of dishes in their homes, including Lord Krishna’s. Out of curiosity, Bal Krishna asked his mother Yashoda regarding the preparation of so many delicious dishes, to which she replied that they are prepared to worship and appease Devraj Lord Indra

Hearing this, Bal Krishna asked about the importance of worshipping Lord Indra, to which she replied that the Earth attains rain due to the grace of Lord Indra. It helps the Earth to produce crops and different kinds of fruits, which acts as a source of food for humans and animals. After listening to his Mother, Lord Krishna expressed his desire to worship Govardhan Parvat, as the cattle graze over there and the mountain is the source of food. After listening to Krishna, the people of Gokul started worshiping Govardhan Parvat.

Indra Dev found the whole situation insulting, and ordered for a pouring rain just to teach the natives of Gokul a lesson. This rain proved to be catastrophic and even destroyed people’s homes. To protect the people of Gokul, Lord Krishna lifted the Govardhan mountain on his little finger, which helped people escape the rain and take shelter. This vision made Indra angrier. It is believed that this rain lasted for seven consecutive days, after which Lord Indra realized that the person he is fighting is not an ordinary one. When Indra Dev came to know that he was competing against Lord Krishna, he apologized. It is believed that Govardhan Puja started since then.

Get Detailed Information on Govardhan Puja