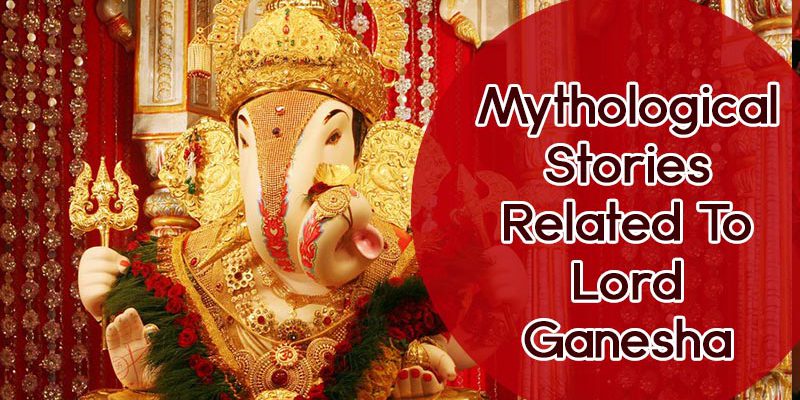 Lord Ganesha is widely known as the “Eliminator” of obstacles and sorrows from the lives of people. That is why he is worshiped before every auspicious task or event, and prayed to shower his blessings. Today, we are going to narrate you some mythological stories related to Ganesha.

Lord Ganesha Inviting All The Gods & Goddesses With His Intelligence

Lord Ganesha is also considered to be the God of Wisdom and Intellect. This story is also related to one of these qualities. According to the scriptures, once Lord Shiva conceived the idea of performing the ritual of Yagna. To materialize this idea, he started preparing for the yagna. To successfully execute his idea, Shiva’s troops took on different responsibilities. But the yajna would be completely successful only when all the Gods & Goddesses participate in this yajna.

Therefore, the biggest responsibility was inviting all the Gods, because Lord Shiva wanted to start this yagya at the earliest. Hence, executing this task in such a short span of time was full of challenges. After much thinking, it turned out that Ganesha should be entrusted with this responsibility, as he is the best in terms of intelligence and wisdom. When Lord Ganesha was entrusted with this responsibility, he also faced a similar challenge of inviting everyone to the ceremony in such a short span of time. Therefore, Ganesh ji used his intelligence to overcome this problem.

He came up with the thought that all the Gods & Goddesses inhabitat within Lord Shiva. So, appeasing him will directly please the Gods and Goddesses. With this, Ganesha started worshipping Shiva and put the invitation cards in front of him. By doing this, every God and Goddess received their invitation, and attended the ceremony at the appointed time.

How Ganesha Came To Be Known As Ekdant?

Lord Ganesh is widely called as Ekadanta, but very few people know the reason or story hidden behind it. According to an account described in Brahma Vaivarta, Parashurama, the supreme devotee of Lord Shiva, once reached Kailash to visit Shiva and Parvati and seek their blessings. When he reached Kailash, Lord Shiva was resting and Ganesh was at the guard. When Parshuram approached towards Lord Shiva, Ganesh stopped him, which led to Parshuram pushing Ganesha in a fit of rage.

Since Parshuram was a Brahmin, Ganesha was avoiding any kind of attack from his side. But when Parshuram did not agree, Ganesh ji held him with his trunk and swung Parshuram in all four directions. After getting free from Ganesha’s hold, Parshuram became silent for a moment but as soon as he felt the humiliation, he attacked Ganesha with his axe, which was given to him by Lord Shiva himself. As this Farsa or Axe was itself offered by his father to Parshuram, he didn’t want to disrespect it and hence withstood the blows of the axe on a tooth. Since then, Lord Ganesh came to be called as Ekadanta.

When Lord Shani Laid His Eyes On Lord Ganesha

The story about the birth of Ganesha and how he got an Elephant head is prevalent and famous. It is said that Mata Parvati created a boy from the Earth’s soil and mud, brought him to light and asked him to guard the gates while she takes a bath. When Lord Shiva arrived to see his wife, the boy, to his unknown, prevented Lord Shiva from meeting Maa Parvati, who, in a fit of rage, separated Ganesh’s torso from the head. Looking at Maa Parvati’s plight and anger, he placed the head of a baby elephant on the body of Ganesha. However, another popular mythological legend in the Brahma Vaivarta Purana is related to Ganesha.

According to this legend, once Shani Dev went to Kailash to visit Goddess Parvati, who was bathing Ganesha at that time. Lord Shani stood in front of the Goddess with his eyes down, which irked her. As she asked the reason. He told that his wife had cursed him that whomsoever he sees will be destroyed. On this, Parvati persisted him to look at her son, Ganesha. Unable to deny her, Lord Shani looked at Bal Ganesh. As a result, Lord Ganesh’s head got severed. After this, Lord Vishnu brought the head of an infant elephant and set it in place of Lord Ganesh’s head.

How Lord Ganesha Became The King Of The Underworld

Ganesh was once indulged in playing sports with the sons of the sages when some Nag Kanyas arrived, greeted the Lord and requested him to go with them to the Naglok or the Kingdom of Snakes. Observing their sincere behaviour and simple nature towards himself, he agreed to go to the Naga Lok with them. A grand welcome was given to him by the Nag Kanyas in the Nag Lok.

After this, when he met Nagraj Vasuki, Vasuki started making fun of his appearance. This made Ganesha angry, which led to him crushing his fangs and wearing his crown himself. When Vasuki’s elder brother came to know about his brother’s plight, he came in a fit of anger to take vengeance from the person who had done this to his brother. But on seeing Ganesh ji, he recognized him and himself declared Lord Ganesh the King of the Underworld.

It is believed that at one time Lord Shiva left his humble abode, Kailash, and started living in the forest. At that time, Lord Ganesha was only six years old. When Vishwakarma came to know about Lord Shiva residing in the future, he decided to meet him. When Vishwakarma was talking to Lord Shiva, little Ganpati also came out at the same time and questioned Vishwakarma if he has brought something for him as well.

On this, Lord Vishwakarma said, “Hey Lord! What can I bring for you, you yourself are the Sachchidanand!”. However, after observing the persistent nature of Ganesha, Vishwakarma presented some items to Ganesha, which included Padma, Ankush and Paash. Ganesh ji became very pleased to get these armaments, and it is believed that once playing with his friends, he killed the demon Vrikasura with these armaments.

Bal Ganesh, the naughty and young form of Lord Ganesha, once stole food from Rishi Gautam’s kitchen, though Gautam Rishi caught his act and informed Mata Parvati about it. As a result, the Goddess tied Ganesha with a rope in the hut as a punishment. After this, Mata Parvati distracted her mind by working but kept feeling like Ganesha is either playing with the Shiva Ganas or sitting in her lap. However, whenever she went inside the hut, she would see Ganesha crying like a normal child. Being a mother, this melted her heart, and she freed Ganesha from the ropes affectionately.

It is said that when Lord Vishnu and Goddess Lakshmi were married, it was decided not to involve Ganesh ji into the auspicious occasion. His major eating habits was the main reason for this exclusion. However, Lord Ganesha wasn’t aware of this decision. When the procession had left, Narada Muni saw Lord Ganesh sitting at the door and told him about the truth.

When Lord Ganesh came to know the reality, he became angry and ordered an army of mice to dig the place from where the “Baraat” or the procession had to pass. With no smooth passage, the chariots of the Gods got stuck to the ground, which made them realize their mistake. At the end, they persuaded Lord Ganesha by apologizing and made him a respectful part of the marriage.

We hope you like our article. We wish you a happy future.