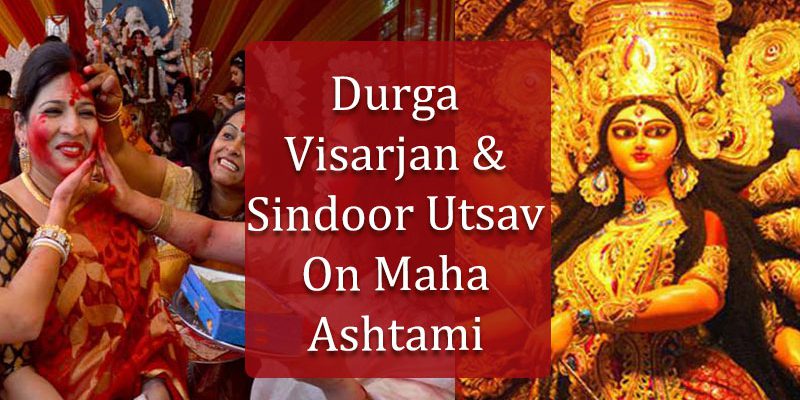 Know Durga Visarjan rituals performed On Maha Ashtami. Along with that, get detailed information about Sindoor Utsav.

The festival of Mahashtami will be celebrated on the second day of the Durga Puja. It will be mainly held in many areas of West Bengal, Assam, Bihar and Odisha. Therefore, this date is also called Maha Durga Ashtami. During this time, devotees revere nine forms of Goddess Durga by placing nine clay urns or Kalash and worshipping them. After this, Kumari Pujan is performed, where young girls are adorned and worshiped as goddesses.

Sandhi Puja holds special significance during Durga Puja on the day of Maha Ashtami. It is a provision to perform this puja on both Ashtami and Navami days. The last 24 minutes of Ashtami and the initial 24 minutes after the beginning of Navami during Sandhi Puja is known as Sandhi Kaal or Period. This duration is considered most auspicious for performing Durga Puja. This is the period when Ashtami Tithi ends and Navami Tithi starts. It is believed that during this propitious period, Goddess Durga appeared on Earth and killed the Asuras or Demons named Chand and Mund. Therefore, in many places of India, there is a tradition of offering animal sacrifices to Mother Durga at the time of Sandhi Puja.

However, with changing times, now people sacrifice fruits and vegetables like bananas, pumpkin and cucumber to the Goddess instead of the animals. Especially in the Vellore monastery, West Bengal, people perform the sacrificial tradition at the time of Sandhi Puja by offering the banana. Along with this, the devotees also light 108 lamps in front of Goddess Durga during this auspicious time.

Sindoor Utsav is celebrated during Durga Puja, and exclusively observed in the regions of West Bengal. This is a very unique and popular tradition, also known as Sindoor Khela. This unique ritual of Sindoor Khela is performed on the day of Vijayadashami before Durga Visarjan, during which all married women apply vermilion or Sindoor to each other and wish well.

AstroSage wishes all readers a Happy Maha Ashtami 2019! We hope that Goddess Durga’s blessings are always with you.