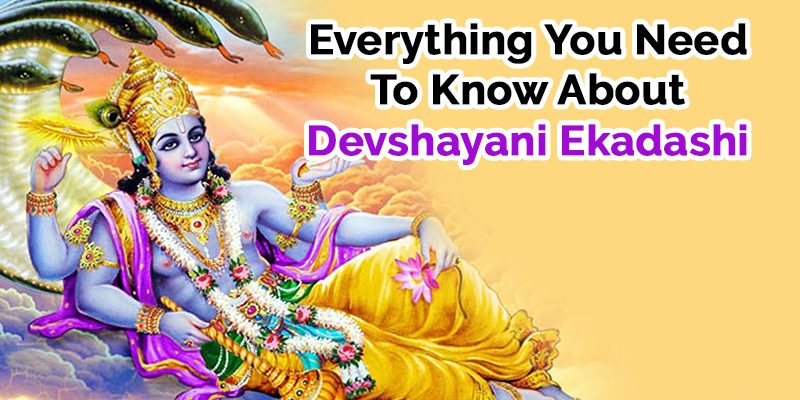 With the beginning of this new month, people are expecting some good news since the ongoing pandemic has completely destroyed people’s dreams and expectations. Amidst this, several questions must be arising within you about your upcoming future. On this note, you can click here and connect with our astrologers to get best astrological solutions and consultations about life problems.

You can also get your personalised Brihat Kundli and find out how these upcoming planetary events, festivals and other celestial movements can impact your upcoming future and various other aspects of your life. Now let us read about Devshayani Ekadashi.

This year, Devshayani Ekadashi will be celebrated on 1 July 2020, on Wednesday.

It is believed that from the day of Devshayani Ekadashi, Lord Vishnu goes to deep, nocturnal sleep for four months. In such a situation, certain rituals are said to be followed before the Lord Vishnu goes into sleep. On this day, devotees observe a fast for him.

Importance of Devshayani or Ashadhi Ekadashi

From the day of Ashadhi Ekadashi, Lord Vishnu goes into deep sleep for four months. This day is also considered as the beginning of the Chaumas. Due to Lord Vishnu being asleep, auspicious or religious activities such as marriage or Yagna are forbidden to carry out. Ascetics who visit places to perform meditation and austerity too refrain from carrying out such acts.

It is believed that during these four months, Braj becomes the main pilgrimage habitat, due to which Ascetics can only visit Braj if they want during this time. After four months when Lord Vishnu wakes up from his deep sleep,  that day is celebrated with fervour and is known as Prabodhini Ekadashi or Dev Uthani Ekadashi.

However, this time, Chaturmas is going to last for a total of 148 days, i.e. five instead of four months. Along with this, this Chaturmas is also considered special, and the reason is that after 160 years, both the Leap Year and Adhikmas are coincidently occurring together. Read more about this special coincidence by clicking here.

During the period of Chaturmas, crying out some acts is considered forbidden. Below we have provided you with a quick list of things you must avoid:

According to the legend associated with Ashadhi Ekadashi, also known as Devshayani Ekadashi, it is narrated that “There used to be a king named Mandhata a long time ago. Since the King was noble-hearted and virtuous, his subjects remain always happy and prosperous. But one time, no rainfall occurred for three straight years, which led to a state of famine. His subjects who were happy and content were living in disappointment.

Seeing the condition of his subjects, the King thought that it would be appropriate to go to the forest to find a way to get his subjects out of this misery. On his way to the forest, the King reached the ashram of the Sage Angira. The Sage asked the King the reason for his troubles to which he replied by expressing his grief in one go. The Sage then advised the King to observe the fast of Ashadhi Ekadashi.

Having obeyed the Sage, the King returned to his kingdom and advised his subjects to devote themselves by observing this fast. The impact of fasting and worshipping was such that it rained once again, which made the entire state financially prosperous. It is believed that by doing this fast dedicated to Lord Vishnu, all the wishes of the native gets fulfilled.

Hope you have liked the information. Thank you all for being a part of AstroSage