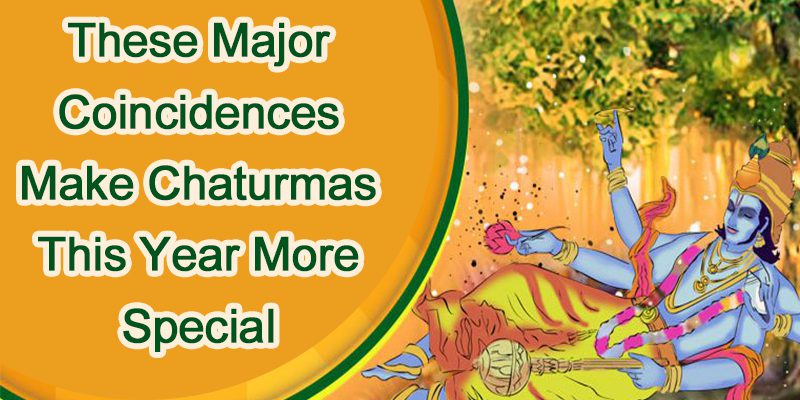 As per the Hindu Panchang, the period of Chaturmas is commencing from 1st July this year. This time, instead of up to four months, Chaturmas will stretch for up to five months. You can also say that the duration will last for up to 148 days in total. This is why this time, the occurrence of Chaturmas is being considered a special event as after 160 years, both Leap Year and Adhikmas are occurring together. Let us reveal that such a similar coincidence occured in the year 1860.

During this period, carrying out any auspicious event or task, especially marriages, Mundan Ceremony and much more is considered inauspicious. This means that you will have to pull up the breaks in case you had anything on your mind amid the ongoing Corona Era.

Because of the widespread pandemic across the country and the world, people are facing several troubles, confused thoughts and stress. On this note, you can click here and seek an enlightening astrological consultation from an expert now!

Chaturmas: What Is It?

Sawan, Bhadrapada, Ashwin and Karthik: the time duration covering these four Hindu months (Chaturmas) is considered significant in Hinduism. Importance about fasting, meditating, chanting etc. has been mentioned. Let us tell you that Chaturmas begins from the day of Devshayani Ekadashi, and ends at Dev Prabodhini Ekadashi in the month of Kartik. As per the Hindu beliefs, these are the four months when Lord Vishnu is believed to be resting and sleeping, due to which carrying out any inauspicious activity during these months is considered a taboo.

According to the beliefs, the period of Chaturmas holds high importance in Hinduism. This year, instead of four months, the duration of Chaturmas will stretch for up to five months. This means, it will begin on July 1, and stretch till November 25. After it ends, natives are free to perform auspicious tasks from November 26. Since two months of Ashwin are occurring this year, a change in the duration of Chaturmas has been observed. For information, let us know that this year, all the festivals after Shraddha Paksha will be delayed by 20 to 25 days.

A Delay In Festive Observances This Year

Previously, Navratri used to start on the very next day after the Shraddh would end. But this year, no such occurrence will be observed. As per the dates, Shraddh will end on 17 September 2020 this year, but Adhikmas will begin from the very next, which will stretch up to 16 October 2020. Navratri will then start from 17 October 2020, after which the festival of Dussehra will be celebrated on 26 October and then Diwali on 14 November. And finally, Chaturmas will end with Devuthani Ekadashi on 25 November 2020.

It is said that in order to attain the sweet fruits of Chaturmas, one must spend his/her time chanting and reciting mantras and meditating while venerating the Lord during this period. As performing auspicious acts such as marriage, Mundan Ceremony, Griha-Pravesh or Housewarming Ceremony etc. are prohibited in this period, travelling during this period must also be avoided as well. You can carry out marriage rituals after Chaturmas ends, but in case you are facing marital troubles, delay in marriage or suffering from Manglik Dosha, you can get your personalised Mangal Dosha Report on time and get accurate remedies and astrological analysis.

Apart from this, it is advisable to take special care of your eating and drinking habits during these months. It is believed that the digestive power of a native becomes slightly weaker during this period.

Although this whole period is considered auspicious, out of all, the month of Sawan is considered extremely fruitful and propitious. According to the beliefs, anyone who recites the Bhagavata Katha, worships Lord Shiva, performs religious rituals or charity in this month attains the Akshaya Punya. It is said that when Lord Vishnu enters the state of sleep or Yoganidra, he entrusts the entire responsibility of the world on the shoulders of Lord Shiva, which is why worshipping Lord Shiva and his family is highly valued at this time.