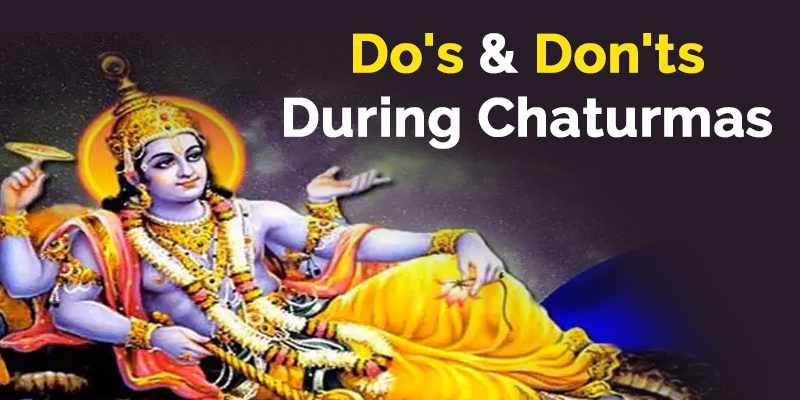 The year 2020 has completely shattered people’s expectations. With the onset of Coronavirus outbreak from the past few months, people are restricted to their homes and prohibited from moving out. Adding onto  it, Chaturmas is beginning from July 1, after which carrying out any auspicious work will be forbidden for the next five months. You can click here and get answers to your doubts and questions related to this event from our expert astrologers.

Chaturmas this year will stretch up to five months i.e. 148 days, which is why carrying out any auspicious ceremony or task such as Marriage, Housewarming Ceremony etc. will have to be discarded. In such a case, several questions about Chaturmas are rising in the minds of people. Through this article, we will give you all the information related to Chaturmas, which will make your upcoming five months special. Also, what are the precautions that should be taken is also mentioned in this article. You can click here now and read our previous blog to know in detail about Chaturmas.

Not only humans but even Gods fall asleep for a specified period of time. This act also holds high importance from a religious point of view. From tomorrow i.e. July 1, Lord Vishnu will remain absorbed in deep sleep in Kshirsagar for the coming five months. With this, Chaturmas will begin.

It is believed that Lord Vishnu resides for four months with Bali, the King of Patala and remains absorbed in Yoga Nidra on Devshayani Ekadashi. Now from July 1, Lord Vishnu is going to be absorbed in deep sleep or Yoga Nidra. Therefore, this will be the time when carrying out all auspicious works and activities will be completely forbidden.

Why Performing Auspicious Tasks Is Forbidden in Chaturmas?

Chaturmas begins with the Devshayani Ekadashi and its significance has been very much mentioned in our culture and scriptures. It is said that when Lord Vishnu falls in deep sleep or Yoga Nidra, demonic powers begin to rise. This is why all auspicious tasks including Marriage Ceremony, Engagement Ceremony, Housewarming or Griha Pravesh Ceremony and Mundan or Tonsure Ceremony are banned, as this time isn’t considered auspicious to carry out such auspicious activities.

It is also believed that when Lord Vishnu goes into deep sleep for the next four months, Lord Shiva saves the earth from demonic domination. That is why, during these four months, special prayers are offered to Lord Shiva to seek his blessings for a prosperous life ahead.

Chaturmas Is Special For Those Who Practice Meditation & Yoga

Right from the beginning of the year, people have been struggling with the ongoing Corona crisis and postponing all their works for the time to come. As any auspicious task has to be dropped out during these five months, this time can be fully utilized by natives in regards to their health.

Currently, the first priority itself is health for everyone in today’s time. But do you know that the period of Chaturmas is ideal for performing Yoga and Meditation? Yes! This is because during this time, along with physical and mental state, the environment and atmosphere remain good.

We all know that Yoga is regarded as the best tool to fight against Coronavirus and increase your immunity. So in these five months, you can improve your health multifold by including yoga and meditation in your life. Also, fasting devotedly and performing good deeds or Karma in these five months will yield fruitful results.