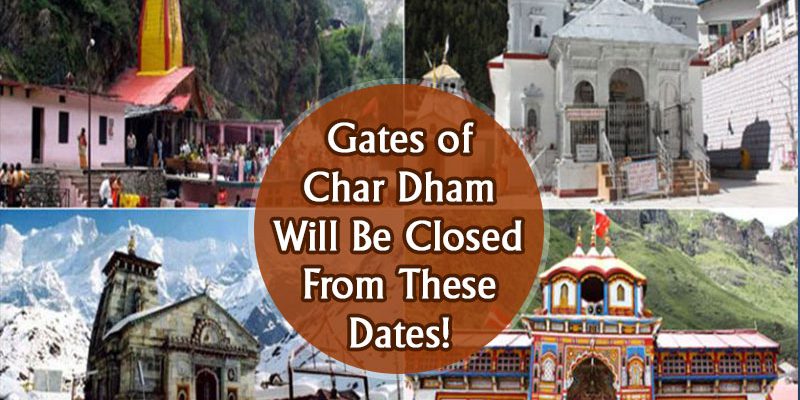 The gates of Char Dham will be closed in the month of October and November. Know the exact dates and read their mythological significance.

Recently, along with Ravana Dahan, the festival of Dussehra was celebrated all over the country. With this, the journey of the Char Dham, a sacred Hindu pilgrimage circuit, has reached its last stage. On the auspicious occasion of Vijayadashami, the dates on which the gates of these abodes get closed has been announced. Read down below, find out the dates and know the legend behind their establishment.

The gates of Badrinath Dham will be closed on November 17, Sunday at 5.13 PM. Along with this, the auspicious time of closure for Kedarnath Dham has been fixed for Tuesday, 29 October. On the other hand, the Muhurat for Gangotri came out on the day of Annakut festival, i.e. Wednesday, 28 October, one day after Diwali. It is worth mentioning that the gates of Kedarnath and Yamunotri Dham will be closed two days after Diwali on Bhai Dooj, i.e. 29th October, and

On the day of Vijayadashami i.e. 8 October, in the presence of Rawal Ishwari Prasad Namboodiri at Badrinath Dham, Mohan Prasad Thapliyal, the Chairman of the committee, announced the dates of gate closure on the behalf of Badrinath-Kedarnath Temple Committee. According to him, following the tradition of Sanatan Dharma, the process of closing the doors will begin from November 13.

For this, the gates of Adi Kedareshwar will be closed first on October 14 after venerating Lord Ganesh on October 13. After this, the Khadag or Sword and Book will be worshipped on October 15, and then on November 16, the Goddess Laxmi will be invited into the Garbh Griha by following traditional rituals.

Kedarnath is one of the sacred Char Dhams or Four Abodes situated in Rudraprayag, Uttrakhand. As per the mythological legend, it is said that Pandavas were looking for Lord Shiva to seek forgiveness after committing sins in the battlefield. With no intention of absolving their deeds, Lord Shiva turned into a bull and hid in the hilly regions of Garhwal, Uttarakhand. After being tracked, he jumped into the ground head-first, resulting in different parts of his body getting scattered over five places, including Kedarnath, famously known as Panch Kedar. Therefore, temples were built at these locations.

Badrinath comes under both the Chota Char Dham and Char Dham, and is a holy place. One of the mythological legends states that after hearing criticism from Sage Narada over living an extravagant lifestyle, Lord Vishnu visited Badrinath to perform austerity as an act of penance. Unbeknown to any weather changes, Goddess Laxmi, Lord Vishnu’s consort, converted herself into a jujube tree to save her husband from harsh sunlight and wind. Appeased by her devotion, Lord Vishnu titled this place as Badrika Ashram.

Gangotri Dham is visited after Yamunotri, and is devoted to Goddess Ganga. According to the historical evidence and scriptures, it is said that Maa Ganga appeared on this mortal land to absolve the sins of King Bhagirath’s ancestors, and cleanse their souls as well as ashes after Bhagirath performed great penance for centuries. It is believed that visiting this place and taking a holy bath in the rivers help to purify one’s soul, mind and body. Also, worshipping the holy Ganga helps to appease Goddess Ganga and seek her blessings.

Read: The Legend Of Yamuna & Yam on Bhai Dooj

Yamunotri is entitled as one of the holy abodes of India and dedicated to Goddess Yamuna. During the Char Dham Pilgrimage Yatra, Yamunotri is said to be the first stop. In mythology, Yamuna is known to be the Lord Yama’s twin sister and Lord Sun’s daughter. Once when Sage Asit Muni was unable to visit Gangotri for the holy bath, a new stream of Ganga appeared alongside Yamuna, therefore marking its sanctity. Bathing in the waters of Yamunotri helps to eliminate painful and untimely death. It is a ritual to boil potatoes and rice in the Surya Kund, one of the hot springs, and distribute it as Prasad.

We hope that you have liked this article. Stay tuned for more interesting blogs at AstroSage, all the very best!