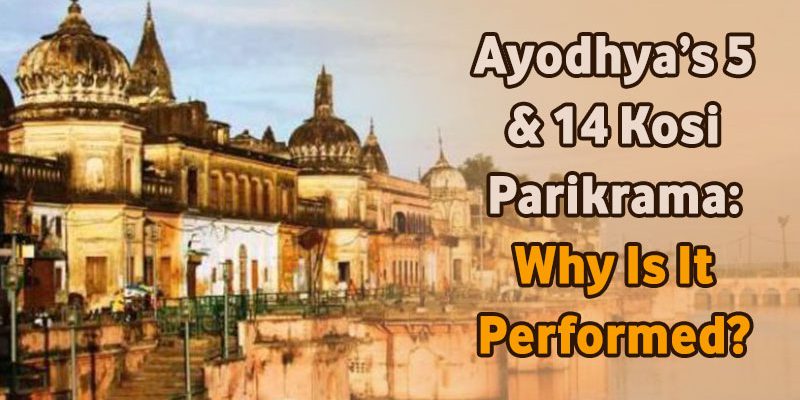 Ayodhya, the city of Lord Rama, is one of the main religious places in Hinduism. Multiple religious events are organized throughout the year in Ayodhya, where devotees take active part. However, a crowd of devotees can be witnessed during the month of Kartik when Parikramas are held. 5, 14 and 84 Kosi Parikrama are held here, where the 14 Kosi Parikrama is held once a year.

In the year 2019, 14 Kosi Parikrama was held on 6 November, while 5 Kosi Parikrama started from 7 November and has ended on 8 November till 11:56 minutes. It is believed that during these Parikramas in the month of Kartik, Lord Vishnu wakes up from his sleep. In this article, we will reveal why performing the 5 & 14 Kosi Parikrama is significant.

This time, a different level of enthusiasm can be seen within the devotees during this event. It is also reported that a final decision on the Ram temple-Babri Masjid case will be made in the month of November. It is also reported that during the 14 Kosi Parikrama, the chief priests of the Sri Ram Janmabhoomi and the Mudai of the Babri Masjid came together, met the devotees who were performing the Parikrama and shared the message of unity with the people of both the communities.

The devotees participating in this Parikrama also paid their homage to Ramlala, located at the Ram Janmabhoomi. Let us tell you that there has been a long-standing dispute over the Ram Janmabhoomi. According to experts, Ram Mandir was previously established at the place where the Babri Masjid is currently located. Evidence of this was found during the excavation held at Babri Masjid, where statues of Lord Rama, Lord Hanuman etc. were found.

Since then, there is an on-going debate over the construction of Ram Mandir on that land. However, no such final decision has been taken on this issue for a long time. Since the verdict rolled out by the Supreme Court is expected to come this month after the 5 & 14 Kosi Parikrama, the security arrangements have been made by the administration in Ayodhya.