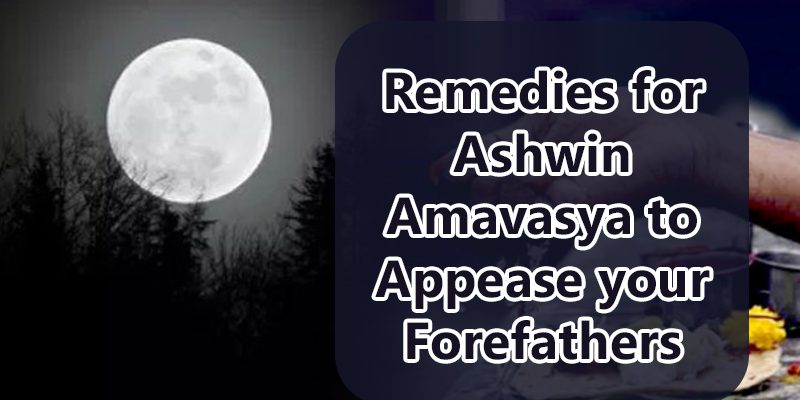 As per the Hindu Panchang, the Amavasya of Krishna Paksha which arrives during the Ashwin month is also known as Pitru Visarjani Amavasya or Ashwin Amavasya. Shradh Paksha ends on this very day. It is believed that the ancestors who arrived on earth from Pitru Lok return to their respective places.

The most important thing about this Amavasya is that it falls during Pitru Paksha, due to which its importance gets enhanced. Keep reading this blog to know more about the Ashwin Amavasya of the year 2020.

Know All the Information Related to Ashwin Amavasya 2020

The above mentioned Muhurat is applicable for Delhi only. Click here to know the Muhurat of your city.

List of All the Other Amavasyas Falling This Year

Why is Ashwin Amavasya Considered Different from All Other Amavasyas?

According to the Hindu Panchang, the Amavasya of the Krishna Paksha which falls during the Ashwin month is known by the names of Sarv Pitru Amavasya, Ashwin Amavasya, Badmavas, and Darsh Amavasya. The duration of Shradh Paksha also ends on this day.

This basically means that our forefathers who have come to Earth in this duration return back to their worlds. In such a situation, it is quite important to organise the Shradh Paksha rituals by following all the necessary rites. It is said that if any person is unable to perform the Shradha of his ancestors, during the Pitru Paksha or forgets due to any reason, then that person must do the same on the occasion of Sarva Pitru Amavasya. On this day, one should send off their forefathers and bid them adieu with all the rites and rituals.

Brahmins are served food on this day and are given donations. Being satisfied with this, our forefathers bless all the family members with happiness and prosperity before leaving for their respective places.

Are you looking for a successful and pleasant life? Raj Yoga Report has all answers!

It is believed that Pitru Paksha ends on the day of Ashwin Amavasya. Therefore, worshipping one’s forefathers is considered highly significant. On this very day, people take baths in holy rivers, Kund etc. After this, water is offered to the Sun followed by Nimit Tarpan for the departed souls.

.In the evening, a Diya/lamp is lit and Puris along with other eatables are placed at the door. There is a belief behind this that the forefathers must not be hungry and see their respective places clearly in the light of diya/lamp while they are returning to their heavenly abode.

In addition to this, if somebody does not have any notion about the Shradh Tithi of his/her ancestors, then their Shradh can also be performed on this day. If you have not been able to perform Tarpan during the entire Shradh Paksha, then on this very day, the same can be performed. Also, it is believed that one is blessed with prosperity if he/she serves the needy with food according to their financial ability.

Thank you for being connected with AstroSage!