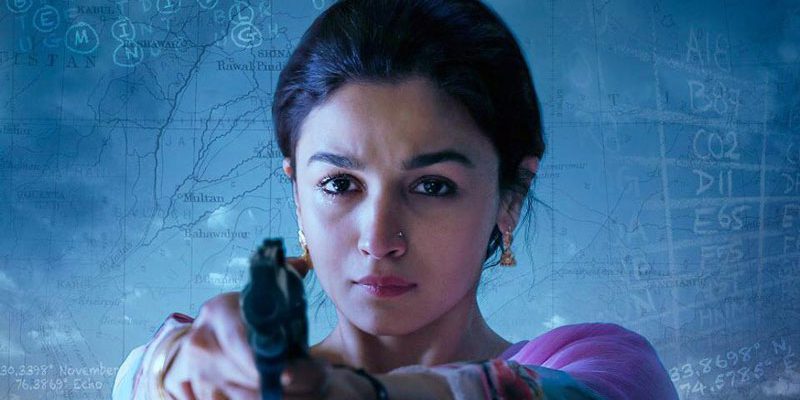 Meghna Gulzar’s Raazi, starring Alia Bhatt and Vicky Kaushal is an espionage drama. The film is an adaptation of Harinder S Sikka’s Calling Sehmat, a book inspired by an ever-so-strong, real-based character of a Kashmiri woman who married a Pakistani army officer to dish out sensitive information to Indian forces. We at AstroSage have gone through movie’s astrological and numerological details to analyze what astrology has in store for the movie, Raazi.

Much like her last movie, “Talvar”, Meghna Gulzar again chooses to serve her platter of cinematic drama, one that is spectacular, personified, and beyond boundaries. Speculations are serene and alit at all times, characters are fitted in an eerie atmosphere of intrigue and historical drama. The movie has a setting of 1971 Indo-Pak war, is expected to have a vintage flavor and touch.

The trailer of Raazi is atmospheric and unsettling. Meghna, who is known for her directorial style relies on intrigue and the dramatic premise of cinematic spectacle. From depicting the story of an ordinary Indian girl to finally dishing out intel information, the character of Alia Bhatt, Sehmat is polarised to give you a sneak peek of a brave heart.

Raazi: A Tale of Fearless Nationalist

Based on the theme of war, rage, and terror, Raazi is a true story of a badass Indian spy who is torn between her relationships and responsibilities towards the nation. She spies on her husband, Iqbal Syed, played by Vicky Kaushal for sake of her mother country. Started his career with films like ‘Masaan’ and ‘ Raman Raghav 2.0’, Vicky Kaushal is all set to kickstart another star cast venture. The actor is also rumored to play a role in Rajkumar Hirani’s biopic on Sanjay Dutt.

Astrological Prediction of the Movie, RAAZI

The trailer of the movie was released on April 10. Alia Bhatt and Vicky Kaushal have appeared in the main roles in the trailer. The film is directed by Meghna Gulzar. Based on the available information, the film will be in theaters on May 11, 2018. But before releasing, we at AstroSage have gone through the numerological and astrological details of the movie to predict what stars has in store for the movie, ‘Raazi’.

The Name number of the movie comes to 3. The film’s name RAAZI is made of the values 2,1,1,7 and 1, and whose total comes to 12. Number 1 is being repeated for 4 times i.e. the film may be related to the political scenario, and the trailer is also being projected like this. The issue of 2 is coming twice, i.e. emotions have also been interpreted. 7 is a betrayal of 3 points indicating improvement. 7 is the number of deception, if the number 3 is indicating an improvement, that is, the film can remain to show these points. Name number of the film is 3 and number 3 and 9 are friends, so the film is going to get a good response as soon as it is released. That means the mutual reconciliation of the release date and nomination of the film can be given 5 out of 5 points.

What Stars Hold for Alia & Vicky

What Movie Says for Meghna Gulzar

For the wild pictures whose name number is 6, the film’s name and the release date are average, that is, the composition of the wild pictures and the film can be given 2.5 out of 5 points. Overall it can say that the film is good. It will be successful in influencing the audience, but as it appears in the trailer, it is dominated by only and only Alia Bhatt’s character. According to the rules, the influence of their character should fall on most people, but the consequences may be anything else. The role of the Vicky Kaushal in the movie might grab the eyes.

People can also do these gossips about Alia that in some senses, Alia should have done better. The special thing is that the direction of Meghna Gulzar and the expectations of the people’s place is a great hope. Before the film is released, we can give it 3.33 points. Broadly speaking, 3.5 stars out of 5.